It all started so normally. Another enquiry, rather last minute and on a Bank Holiday weekend which was strangely gig-light, so gig-light that we'd almost decided to pack our bags and head away from the bright lights of Mariachi Land and have a few days "finding ourselves". But a gig is a gig as they say, and this seemed rather straightforward - an afternoon gig just down the road in Barnet, and the enquiry said it was of type "Outdoor Event / Festival".

Gig booked, it wasn't long before my phone started an incessant buzzing - on checking, it seemed there was rather a lot of activity on our Twitter feed, with the rather mysterious hashtag "Operation Mariachi" surfacing repeatedly.

I felt there seemed to be more to this than immediately met the eye and was straight on the phone to Trevor, a genial, football loving Grimsby Town fan who had masterminded this whole intricate event, and the story began to reveal itself - a story of one football team, an inflatable shark and a plan of Mariachi revenge...

Since the 80s, apparently, Grimsby Town FC fans have made a habit of taking inflatables to their matches - a seemingly innocent enough state of affairs, but at their last match against Barnet, all hell broke loose when one of their fans - known forever on as "Sharky" - was arrested and charged with assault after striking a steward over the head with a blow-up shark. Battle lines had been drawn, and for the upcoming match at Barnet, all inflatables had been banned. The last away match of the season for Grimsby needed something special, and if inflatables were off limits, the next best thing was a mariachi band amongst a sea of sombrero wearing and moustachioed good-natured maniacs, chanting, jeering and generally unleashing a little Mexican anarchy on Barnet's fans.

OK, all a little different there, but when Trevor explained that he'd just recorded a TV interview for BBC News about it, and subsequently a phone call to me from the Beeb asking permission to use a clip from our publicity video - well this was clearly going to be no ordinary day's work for us. And when over 50 thousand people viewed the clip of the TV news story I posted, Beato Burrito and Grimsby Town FC were clearly massive news!

Fast forward 2 days to the day before the match, and I received a call from BBC Humberside - can I, Juan Juan, be interviewed live in an hour's time! I duly recorded the interview - a mention of Enchilada Tossing did cause a second of discomfort for my interviewer but it was all clean family fun as I explained - and now the world was on the edge of it's seat for the following day's madcap mayhem.

To the day of the match....and it began in a small disabled toilet with us interviewed and performing Don't You Want Me for another spot on Radio Humberside. This was followed by a performance in the away fans' bar which has to be the loudest and most raucous audience we've ever played to - I honestly don't know if three quarters of the people in that bar could even hear us, but the atmosphere, with absolutely everyone in sombreros and Mexican moustaches singing their hearts out to our renditions of classics such as Ring of Fire and Just Can't Get Enough, sent a chill down our spines, and something that we'll never forget. Next stop onto the terraces, where if anything the atmosphere got even better - and it seemed when Barnet tried to sour things by scoring (not in the script!) our lads got even louder!

We strolled around the pitch at half time and the Barnet fans too were wonderful - this whole event was well-natured and even the final score of 3-1 to Barnet didn't really sour things too much. A quick TV interview to end things - as you do - and that was the end of what is, so far, without doubt the strangest week in Beato Burrito's career.

Check back soon
Once posts are published, you’ll see them here. 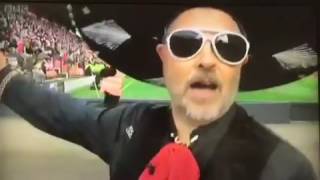